The World Health Organization this week is holding its first-ever global conference on air pollution and health (30 October-1 November) in order to shed light on the alarming death toll of 7 million premature deaths caused every year by toxic air pollution and to call for a drastic scale-up of effective interventions to combat the problem. 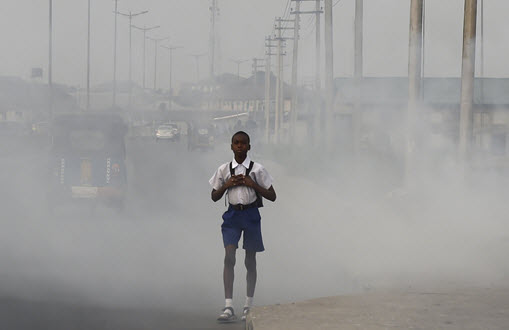 “Mobilizing everyone to stop this massacre of 7 million premature deaths occurring every year due to exposure to air pollution,” Maria Neira, WHO director for public health, environment and social determinants of health, told Health Policy Watch in an interview is a key objective for the conference.

Nearly six hundred delegates including ministers of health, environment and energy, health professionals, mayors, and representatives from UN and other international agencies, academia, civil society, and the urban planning, transport and energy sectors are expected to attend the conference to be held at WHO’s headquarters.

“This is a call for a very urgent mobilization, and for scaling up dramatically all the actions and interventions and solutions that are there, and for joining forces, and to start to clean the air that is killing so many people around the world and putting our health at risk into the future as well,” Neira said.

Neira, a Spanish national, also emphasised that the conference provides a forum for the health sector to use “this very strong and powerful health argument to start to influence more sustainable and healthy energy policies, more healthy urban planning and development, more healthy access, and promoting more access to sustainable public transport and essentially all of those measures that are basic and public health oriented.”

“If we add our health voice to all those movements for sustainable development, I think the results could be amazing,” she added.

Similarly, Tedros Adhanon Ghebreyesus, WHO director-general, in an opinion article published in the Guardian newspaper on 27 October argued air pollution is the “new tobacco” and noted it was time to tackle this epidemic: the toxic air that billions breathe every day, but also critically remarked “a smog of complacency pervades the planet over this silent public health emergency.”

Dr Tedros was hopeful, however, that during the high-level “action day” he expected ministers, mayors, heads of intergovernmental organisations and others “to make new commitments to reduce air pollution and its impact on health.”

“This will include measures like strengthening standards and legislation on air quality, improving assessment on the effects of pollution, enhancing global leadership and advocacy, ensuring access to clean energy and increasing investments in low-emissions technologies, as well as research, monitoring, and evaluation,” he said.

The WHO estimates that around 9 out of 10 people worldwide breathe air containing high levels of pollutants and says that 7 million people die every year from fine particles in polluted air that penetrate deep into the lungs and cardiovascular system causing diseases including stroke, heart disease, lung cancer, chronic obstructive pulmonary diseases (COPD) and respiratory infections, including pneumonia. The agency says that 90 percent of air pollution-related deaths occur in low-and-middle-income countries.

Ambient (outdoor) air pollution, the WHO estimates, caused about 4.2 million premature deaths worldwide in 2016, and noted 58 percent were due to ischaemic heart disease and strokes, 18 percent due to COPD and acute respiratory infections respectively, and 6 percent were due to lung cancer.

Similarly, the WHO says household air pollution from cooking and polluting fuels and technologies caused an estimated 3.8 million deaths in the same period and noted 27 percent were due to pneumonia, 18 percent from stroke, 27 percent from ischaemic heart disease, 20 percent from COPD and 29 percent from lung cancer.

On 27 September, during the UN General Assembly’s third high-level meeting on non-communicable diseases, WHO’s Tedros warned the world was “dangerously off-course” in meeting the Sustainable Development Goals (3.4) target to reduce premature mortality from NCDs by one-third by 2030.

During the high-level plenary, delegates also adopted a political declaration on the prevention and control of NCDs that also included calls to increase global awareness and international cooperation on environmental risk factors to address the high number of premature deaths from NCDs attributed to human exposure to indoor and outdoor air pollution (para 31), and to promote healthy communities by addressing the impact of environmental determinants of NCDs including air and climate change (para 32).

Even more alarming, a new WHO report on air pollution and child health released on the eve of the global conference found every day about 93 percent of the world’s children under the age of 15 years (1.8 billion children) breathe air that is so polluted it puts their health and development at risk. It noted that in 2016, an estimated 600,000 children died from acute lower respiratory infections caused by polluted air.

The report also concluded that “when pregnant women are exposed to polluted air, they are more likely to give birth prematurely, and have small, low birth-weight children. Air pollution also impacts neurodevelopment and cognitive ability and can trigger asthma, and childhood cancer. Children who have been exposed to high levels of air pollution may be at greater risk for chronic diseases such as cardiovascular disease later in life.

Other key findings were:

* One reason why children are particularly vulnerable to the effects of air pollution is that they breathe more rapidly than adults and so absorb more pollutants.

* They also live closer to the ground, where some pollutants reach peak concentrations – at a time when their brains and bodies are still developing.

* Newborns and young children are also more susceptible to household air pollution in homes that regularly use polluting fuels and technologies for cooking, heating, and lighting.

What is of concern as well, she said, “is the long-term exposure, starting in the prenatal and post-natal and childhood, and this permanent and chronic exposure is the one that will stop lung development and the motor and neurological development.”