Ecological degradation, climate change, and exploitative marketing practices are the greatest emerging threats to children’s health, says a new report from a WHO-UNICEF-Lancet Commission on the future of child health.

Despite dramatic improvements in survival, education and nutrition for children over the past five decades, the report, titled A Future for the World’s Children?, found that today’s youth face an “uncertain future.”

“Progress [in child and adolescent health] has stalled, and is set to reverse,” said former prime minister of New Zealand and Co-chair of the Commission, Helen Clark, in a press release.

“It has been estimated that around 250 million children under five years old in low- and middle-income countries are at risk of not reaching their developmental potential, based on proxy measures of stunting and poverty. But of even greater concern, every child worldwide now faces existential threats from climate change and commercial pressures.”

The report finds that economic inequalities persist in countries across the board, affecting the ability of indigenous and marginalized children to thrive. Commercial practices push heavily processed foods, sugary drinks, alcohol and tobacco at youth, contributing to a “double burden” of over and undernutrition. And climate disruption is creating “extreme risks” to children from rising sea levels, extreme weather events, water and food insecurity, heat stress, infectious diseases, and large-scale migration.

According to the report, children are particularly vulnerable because they often lack a voice in policy and health governance, relying instead on parents, governments, and local and global leaders to act in their best interest. Yet a global movement led by youth climate activists such as Sweden’s Greta Thunberg and India’s Licypriya Kangujam has caught the attention of leaders around the world – and allowed children to insert a voice in policymaking. However, global frameworks for promoting and monitoring progress in such matters and in child health are still insufficient.

The Commission compared measures in child education, survival, nutrition, and health across 180 countries to rank countries by “child flourishing”- a concept that aims to represent a holistic view of child health. The report also measured sustainability by using a proxy for greenhouse gas emissions, and equity along with income gaps in order to measure future threats to child health.

Based on the child flourishing index, children in high-income countries such as Norway, South Korea, and the Netherlands had the best chance of surviving and thriving, while children in Sub-Saharan Africa and the Sahel faced the worst odds. However, high-income countries also represented the bulk of the world’s emitters, contributing disproportionately to future threats for children’s health. When ranked by CO2 emissions, Norway fell to 156, South Korea to 166, and the Netherlands to 160. The United States, Australia, and Saudi Arabia represented the highest emitters by volume. 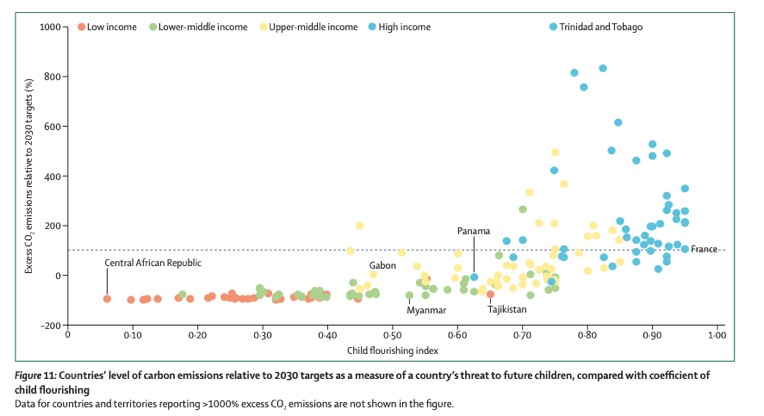 “We all know from the science that the carbon budget is giving us at most ten years before we exceed 1.5 degrees of warming and that was a target agreed by all countries at the Paris Agreement five years ago. We’re way off track, emissions are going up and the future for children we can see all around us already,” Anthony Costello, professor of Global Health and Sustainability at the University College London and lead co-author of the study, said at a press briefing.

Most urgently, the report finds that countries ranked lowest for child flourishing are contributing the least directly to the existential threat caused by climate change, but will likely be most susceptible to the impending ecological damage.

“While some of the poorest countries have among the lowest CO2 emissions, many are exposed to the harshest impacts of a rapidly changing climate,” said Awa Coll-Seck, health minister of Senegal and co-chair of the Commission. “More than 2 billion people live in countries where development is hampered by humanitarian crises, conflicts, and natural disasters, problems increasingly linked with climate change.”

A handful of small countries, however, seem to be on track for both child flourishing and sustainability – Albania, Armenia, Grenada, Jordan, Moldova, Sri Lanka, Tunisia, Uruguay, and Viet Nam all ranked within the top 70 for child flourishing, and are on track to beat their CO2 emission per capita targets by 2030.

“This must be a wakeup call for countries to invest in child health and development, ensure their voices are heard, protect their rights, and build a future that is fit for children.”

According to the findings, children are “frequently” targets of advertisements for addictive and unhealthy foods – which can contribute to childhood obesity and poor nutrition. The report cited a review of 23 studies in Latin America that found advertising exposure was associated with a preference for and purchase of unhealthy and low-nutritional value foods by families and children who were overweight or obese.

Additionally, children are often exposed to advertising for products for adult use, such as alcohol, tobacco, and e-cigarettes. E-cigarette advertising is of specific concern to high-income countries such as the United States, where youth exposure to television e-cigarette advertisements increased by 256% between 2011 to 2013. There is even evidence of inequities in exposure to harmful marketing – one study cited by the report found that African-American and Hispanic youth in Los Angeles were exposed to twice as many alcohol advertisements per day as non-Hispanic white youth.

Another unknown threat is “the trend in social media advertising and algorithm targeting,” said Costello, who added he was “rather horrified” to learn that many search engines and social media websites operate by selling consumer data, including data generated by children’s profiles, according to a report released by the Norwegian Consumer Council in 2019.

“This is totally unregulated, unlike TV and the other forms of media. And we know that self-regulation doesn’t work.”

Solutions for the Future: Opportunities to Protect Child Health

The report concludes with a series of recommendations for the global community to mitigate the threats to child health, including:

“Children are already advocating for the need for a shift in the governance structure and that they should be playing a greater role in driving the agenda,” said Jennifer Requejo, senior technical officer for the Partnership for Maternal, Newborn & Child Health.

“The opportunity is great. The evidence is available. The tools are at hand…It will take courage and commitment to deliver,” added Richard Horton, editor-in-chief of The Lancet family of journals. “It is the supreme test of our generation.”

Image Credits: WHO, A future for the world’s children? A WHO-UNICEF-Lancet Commission.