A World Health Organization report released today has found that global malaria cases are around the same level as last year, confirming that progress to address the disease has stalled. Rates of malaria are up in high-burden countries, while rates have decreased in other countries due to country-led efforts, the report found. To bring progress back on track to meet global targets, the WHO and partners today announced a new response led by high-burden countries to scale up malaria prevention and treatment. 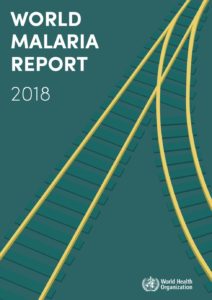 The WHO launched the World Malaria Report 2018 today in Maputo, Mozambique, one of the high burden malaria countries.

Alongside the Roll Back Malaria (RBM) Partnership, the WHO also announced a new country-driven initiative called, “High burden to high impact,” to support high-burden countries’ efforts to scale up their malaria response in order to meet malaria targets, according to a WHO press release.

To effectively scale up the response to reach these targets, the release explained, more funding will be needed from both international donors and domestic financing.

The WHO held a press briefing on 14 November to present the findings of the report and to provide details on the new initiative.

The report presents a comprehensive review of progress in the fight against malaria through 2017. It found that while there has been a substantial reduction in cases of malaria since 2010, “the analysis indicates a stalling of the progress between 2015 and 2017,” according to the report.

It found that “in 2017, there were an estimated 219 million malaria cases globally, compared with 214 million cases in 2015 and 239 million cases in 2010. The reduced or reversed progress in countries with the highest malaria burden is one of the main contributors to the stalling of the global progress.”

WHO Director General Tedros Adhanom Ghebreyesus (Dr Tedros) said in the report that there are two findings that are “particularly worrying: first, several countries that carry a disproportionate burden of disease have reported increases in malaria cases, setting us back even further; and second, the level of investment in malaria control remains inadequate.”

WHO Global Technical Strategy targets set in 2015 to reduce malaria case incidence and death rates by at least 40 percent by 2020 “are not on track to being met,” the release said. To meet the 2030 targets of the global malaria strategy, “malaria investments should reach at least US$6.6 billion annually by 2020 – more than double the amount available today,” it said.

The report found that while there were increases in rates of malaria in high-burden countries, there were also reductions in malaria cases in other countries, which experts have attributed to effective country-led efforts.

“In 2017, approximately 70% of all malaria cases (151 million) and deaths (274 000) were concentrated in 11 countries: 10 in Africa (Burkina Faso, Cameroon, Democratic Republic of the Congo, Ghana, Mali, Mozambique, Niger, Nigeria, Uganda and United Republic of Tanzania) and India,” the release states.

While there were “3.5 million more malaria cases reported in these 10 African countries in 2017 compared to the previous year,” it explains that “India – a country that represents 4% of the global malaria burden – recorded a 24% reduction in cases” during the same period.

Additionally, Ethiopia, Rwanda and Pakistan also showed significant progress. From 2016 to 2017, Rwanda recorded 436,000 fewer cases, and Ethiopia and Pakistan both reported a decrease of more than 240,000 cases, it said.

Focusing Efforts in High Burden Countries is Key to Progress

To get back on track to meet global targets, response efforts and funding will need to focus on the countries where the malaria burden is greatest, and it is these countries that will lead the response, the release explained.

“The new country-led response will jumpstart aggressive new malaria control efforts in the highest burden countries and will be crucial to get back on track with fighting one of the most pressing health challenges we face,” Kesete Admasu, CEO of the RBM Partnership, said in the release.

The response, according to the release, is based on four pillars:

This response “follows a call made by Dr Tedros at the World Health Assembly in May 2018 for an aggressive new approach to jump-start progress against malaria,” the release said.

As part of these efforts, the “WHO will work with NMPs [national malaria programmes] and partners to undertake in-depth country-focused analyses in these 11 countries over the coming year, to understand the determinants of the malaria trends and to develop recommendations for tailored subnational mixes of interventions that will re-energise the fight against malaria,” according to the report.

Reaching 2030 Targets Will Require International as well as Domestic Funding

In order to reach 2030 targets, funding for the global malaria response must double by 2020, the release explains, and this includes funding from international donors as well as domestic financing.

“As reductions in malaria cases and deaths slow, funding for the global response has also shown a levelling off, with US$ 3.1 billion made available for control and elimination programmes in 2017 including US$ 900 million (28%) from governments of malaria endemic countries,” the release explained. The United States remains the largest single international donor, contributing US$ 1.2 billion (39 percent) in 2017, it said.

While there has been a slight increase in disbursements in 2017 from 2016, Alonso said in the press briefing that the current investment is at about USD 3 billion, which is comparable to where it was at in 2013, and about half of what it needs to be annually to reach 2030 targets.

The importance of having the World Malaria Report is that it looks at the burden and “could actually bring the limelight to where the problems are, and call for more investment,” he said. “Next year will be the critical year, because this will be the year of Global Fund [to Fight AIDS, Tuberculosis and Malaria] replenishment.”

“It’s critical that we have a successful replenishment of the Global Fund next year, and that the partners that have been the big funders to date … sustain their funding,” Alastair Robb, senior advisor of the Global Malaria Program at the WHO, said at the press briefing.

“But that is then complemented by domestic financing, and it’s seen as a priority in countries because a child dies every 2 minutes as a result of malaria,” he said. “That is a responsibility of those governments to be able to ensure that the resources are made available, and it’s [also] about more efficient and effective use of those resources.”

[Update] Medicines for Malaria Venture (MMV), a leading product development partnership for malaria medicines based in Geneva, pledged to support this country-led initiative “by developing and delivering new innovative antimalarial medicines for vulnerable populations,” according to an MMV press release.

“MMV recognizes the critical unmet medical needs of malaria patients in the highest burden countries highlighted in the World Malaria Report 2018,” David Reddy, CEO of MMV, said in the release. “Both our available and in-development medicines hold much promise to support country-led efforts to defeat malaria today and tomorrow.”