(Geneva Solutions) – As Guinea and the Democratic Republic of Congo discharge their last Ebola patients, following the most recent outbreak, new research points to the virus’ long lasting ability to lurk within the body. So while the 42 day countdown begins to the day when both countries can declare that the current outbreak is over, preparedness remains key to heading off future infections everywhere in the region, warns the International Federation of Red Cross and Red Crescent Societies (IFRC).

However, global health officials warn that vigilance needs to remain high.  That is particularly true, in light of the recent evidence that the Guinea outbreak was apparently triggered by an Ebola survivor who carried the virus unknowingly for five years before transmitting it to someone else.

The Republic of Guinea was one of the countries at the center of West Africa’s Ebola virus epidemic that raged from 2014-2016 claiming 11,000 lives.  The DRC faced a major outbreak in 2018, that concluded a year later, but has been followed by others. During the most recent DRC outbreak in February, 12 cases were confirmed leading to six deaths – while 1,737 people were vaccinated against the virus, according to the WHO – with IFRC teams on the ground providing key support.

“The main objective of the Red Cross’ intervention on the ground, over the past two years or so, is to ensure Ebola is contained, and does not spread to other areas and across borders into countries such as South Sudan and Rwanda,” Dr Balla Conde, who is managing the IFRC response on the ground with a team of 100 health workers, told Geneva Solutions.

In the case of Guinea, the outbreak declared on 14 February 2021 in the N’Zerekore region led to 14 confirmed cases, leaving five people dead.   However, the even more worrisome aspect of the current Guinea outbreak was its apparent source – a survivor of Guinea’s previous 2014-2016 outbreak who appears to have harbored the virus for as long as five years, before infecting someone else.

The last #Ebola patient in #Guinea🇬🇳 was discharged on Tuesday night in N'Zérékoré 38 days after the start of the outbreak.

With no new confirmed cases, the 42-day countdown to the end of the Ebola outbreak in Guinea has officially begun!👏🏿👏🏿 https://t.co/l5uLsY5dPZ

The new research findings about “Patient O” of the 2021 outbreak in Guinea hold serious implications for the longevity of one of the world’s most deadly pathogens.

The discovery was made in the course of contact tracing and genetic sequencing of virus strains in Guinea’s present-day patients, which linked those cases back to strains prevalent in 2014 and a recovered patient from that time, according to three independent studies released. Given the lengthy interval between the two events this comes as a “shock” to virologists.  It had been previously believed that the outbreak was transmitted by an animal such as a bat.

“This is absolutely stunning,” Dr Angela Rasmussen, a virologist at Georgetown University in Washington DC, wrote on Twitter, adding. “This is bad for a whole host of reasons, including the further stigmatization of Ebola virus disease survivors.”

This suggests that this new outbreak resulted from transmission from a persistently infected survivor of the prior epidemic, which is bad for a whole host of reasons, including the further stigmatization of Ebola virus disease survivors.https://t.co/ojHzxlAW1J

Previously, the longest reported duration of virus persistence in an EVD survivor was 531 days, reported on in 2016. That case involved  a 56-year-old survivor whose seminal fluid contained the virus 17 months after the onset of the disease.  According to the reports, he sexually transmitted the virus to someone else in early 2016, triggering further infections in Guinea, one of which was carried back to Liberia.

While it is rare for survivors to harbour and transmit the virus after such a long period, scientists now understand that the virus can remain in the body for a sustained period of time in places such as the eyes, spinal cord and testes – which are not easily reached by immune defences.

The overriding message, she said, is that people must “remain vigilant, keep physical distancing, disinfect spaces and ensure that people have all the right information.”

Reports linking some of the episodes of virus resurgence to sexual transmission could wind up stigmatising  Ebola survivors, warned Gwen Eamer, public health expert in emergencies at the IFRC.

“Although the findings of the virus sticking around for a long time may be true, it is important that we do not jump to conclusions that it is due to sexual transmission as this has very real impacts on survivors,” said Eamer. 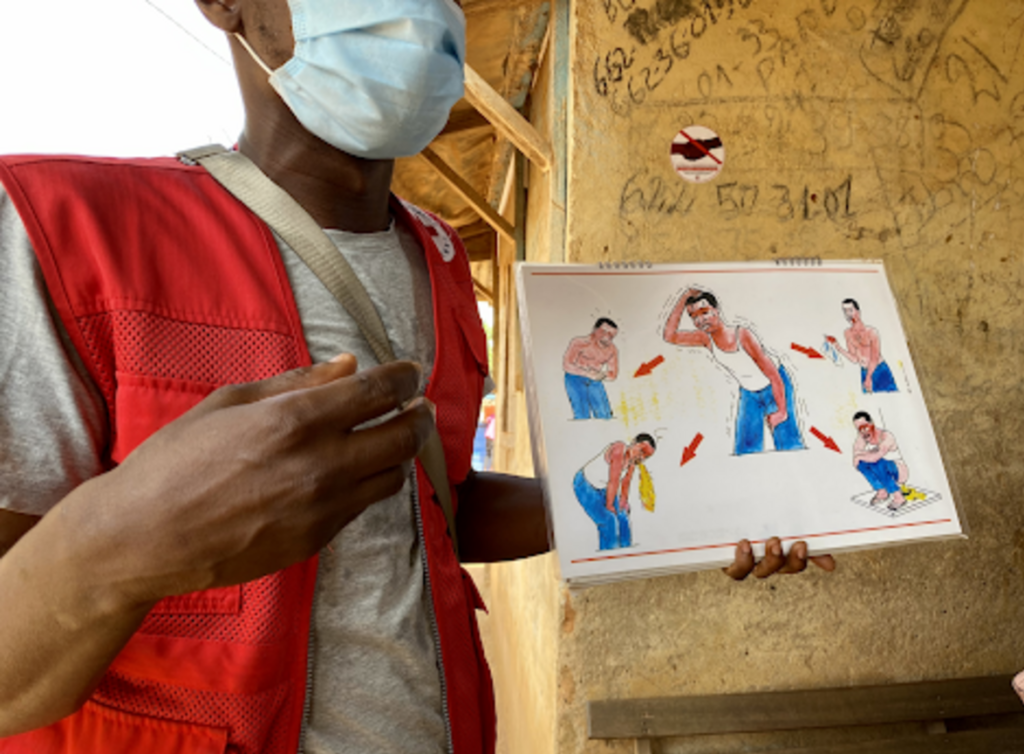 Meanwhile, IFRC officials said that they are supporting local health systems by building capacity for community-based disease surveillance. In these cases, trained community volunteers seek out and report cases of people whose symptoms appear to meet EVD definitions, and take blood samples to confirm suspected cases.

Such training is vital as many common illnesses, including influenza, malaria, typhoid and cholera have similar symptoms of vomiting, and fever to Ebola.

Another pillar of preparedness is ensuring safe and dignified burials – since the Ebola virus is also very easily transmitted after the person has died of the disease.

“We know from the previous outbreak in Guinea and neighbouring countries that burials and funerals were key drivers of transmission, because of traditional burial practices that involve touching the body,” said Eamer.

To ensure “safe and dignified burials, we provide the team with personal protective equipment,” said Eamer, adding that the teams actively support the family, while “adapting funeral rituals ensuring that the dignity of the deceased remains intact, taking into account the mental health, social, cultural and religious perspectives.”

There is a higher level of trust today between communities and Red Cross field workers – something that represents a very positive shift from the 2013-2016 Ebola epidemic – and makes it easier for the organization to do it’s work, adds Nolte.

She adds that Covid-19 also has highlighted to policymakers the importance of preparedness for other highly contagious viruses, e.g. Ebola, which pose “perpetual” threats to countries’ economies and societies.

However, the new research findings have also renewed calls for more widespread EVD immunisation campaigns across larger parts in West and Central Africa.

That would require more funding, including some 8.5 million Swiss francs that the Red Cross says it needs for the Ebola response – which has only garnered less than a one million so far.